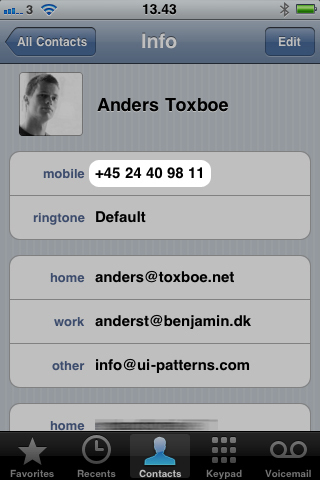 Group information into a limited number of units or chunks, so that information is easier to process and recall.

Make information easier to understand and remember by breaking it down into smaller groups, or chunks. Chunking helps accommodate our limited capacity for processing information and storage in short-term memory.

Chunk larger piles of information into smaller chunks to make it easier for the user to comprehend and get an overview. Deciding on how information is chunked together can help form the user’s perception of what is important and worthwhile to remember.

Chunking text into paragraphs with headers allow scanning for a particular subject. The choice of headers and what should go into which paragraph help form the reader’s perceived meaning of the text.

How far should I chunk – and what?

Every kind of information can be chunked. You should however restrict yourself from grouping in too many chunks. There has been some discussion around what the maximum number of chunks that can be processed by short-term memory. Recent research2 suggests that the magic limit is four plus/minus one whereas older literature3 suggests up to 7 plus/minus two.

Do not use chunking to improve simplicity or to unclutter the design of a web page. Chunking is only to be used as an argument to ease the way we process information. Design decisions about the number of menu items, power points bullets, or radio buttons can’t be justified through chunking but likely through other arguments.

Arguing for using the principle of chunking in design should only regard “the limits on our capacity for processing information”3. In other words, chunking is ideal when specific information must be memorized for later use or when an interface must compete against other stimuli for the attention of the working memory of the end user4.

The goal of chunking is to aid processing of information. Chunking helps the process by breaking longer strings of information into bit-size chunks that are easier to remember and grasp – especially when the memory is faced with competing stimuli4.

In 1956, George Miller produced evidence that people can remember about seven chunks in short term memory, which was later corrected to three to five items in later research. Using this finding, chunking large sets of data into smaller chunks, makes them more managable to digest, processing one chunk at a time.

2 “The Magical Number Four in Short-Term Memory: A Reconsideration of Mental Storage Capacity” by Nelson Cowan, Behavioral and Brain Sciences, 2001.

3 “The Magical Number Seven, Plus or Minus Two: Some Limits on Our Capacity for Processing Information” by George Miller, The Psychological Review, 1956, vol. 63, p. 71-97.