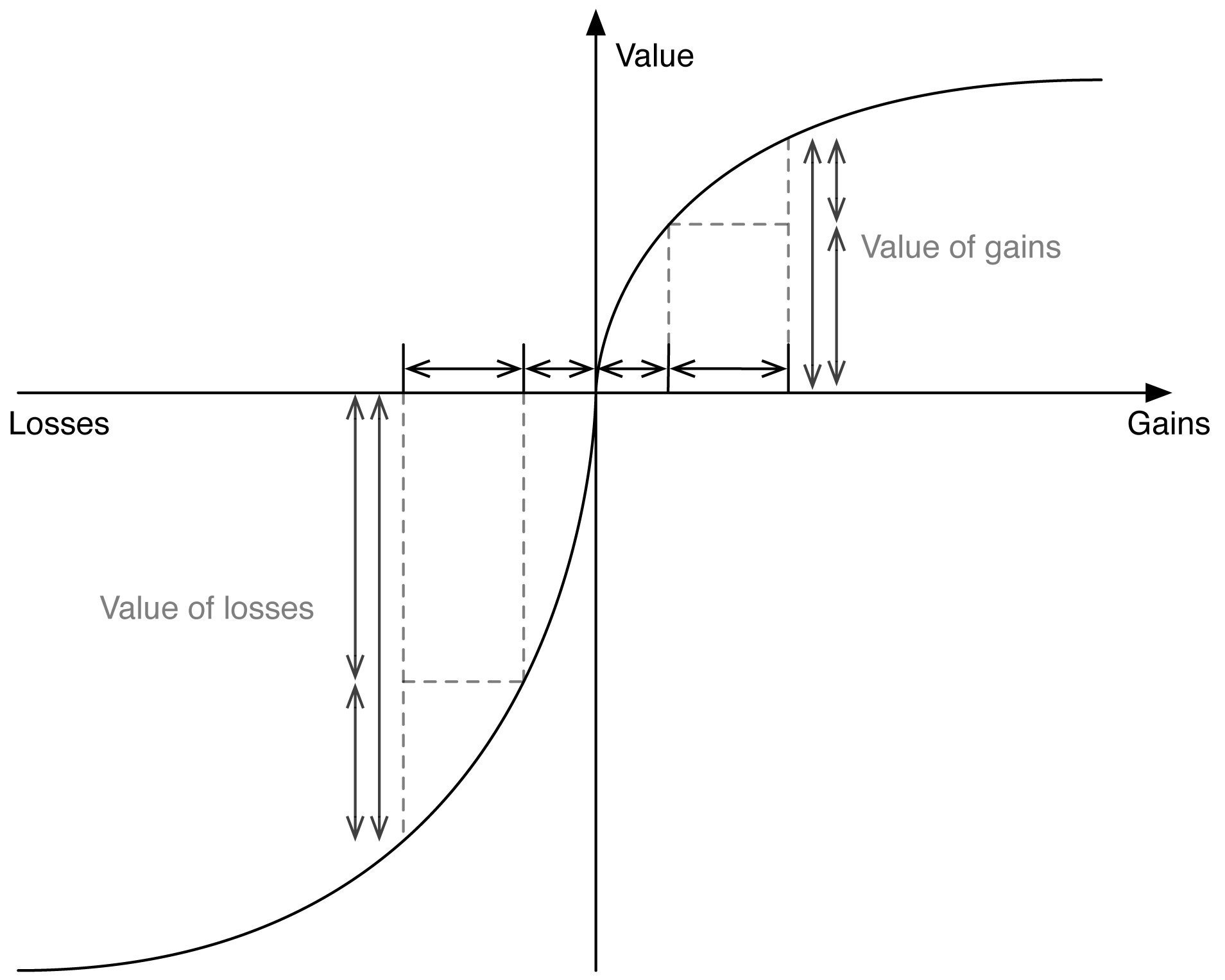 ▲ The value function of prospect theory was developed by Daniel Kahneman and Amos Tversky. The s-shaped asymmetry implies, given the same variation in absolute value, there is a bigger impact of losses than of gains (loss aversion).

In the critical moment of making a decision, the user’s choices can be framed as either a gain or a loss. 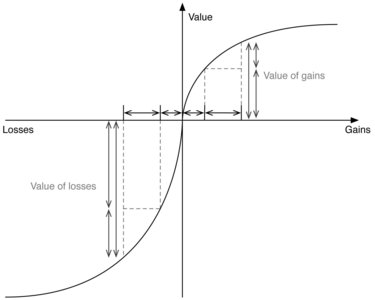 The value function states that people tend to overreact to small events, but under-react to medium and large events. It also states that if a user looks at respectively a gain and a loss of the same absolute size, the loss is perceived as having greater value than the gain.

The concepts of loss aversion, status-quo bias, the endowment effect, and fairness and reciprocity is explained by what Kahneman and Tversky call the value function. The center of the value function is the user’s point of reference from where any change will be seen as either a loss or a gain. The concave gain side and convex loss side illustrates loss aversion and diminishing sensitivity1.

To leverage these facts, Thaler lists 4 principles1 for framing.

1. Segregate gains, as the gain function is concave

2. Integrate losses, as the loss function is convex

You are better off telling it all as it is. As losses are integrated, their combined negative value diminishes – so get it all out while you are at it!

It is possible to “cover up” losses by combining it with a gain that has a larger perceived positive value than the loss is negative.

Segregate small gains from larger losses, as the gain function is steepest at the origin segregating it can bring more value than using a small gain to reduce a large loss.

How to apply loss aversion to your product

Moving from theory to practice – here are a suggestions as to how you can apply the power of loss aversion to your product.

The displeasure of losses makes us go to greater lengths to avoid them rather than take risks to obtain gains. Frame gains and losses to make some options seem more desirable than others. What is lost by leaving your service? Offer perceived value that can potentially be lost on closing an account.

When the outcomes of a decision are uncertain, emotions play a role in guiding it. Emotions are the tools we use to simplify the world into heuristics, or general rules of thumb, as they allow our brains to take shortcuts and approximate rational thinking. Fear and anxiety detect risky choices, why we need emotions to make rational decisions.

This means that our willingness to make a decision does not have anything to do with how much we already have (i.e. our state of wealth), but rather if we are to gain or loose. So even if we have a million dollars in our bank account, we will still be as aversive towards loosing $20 as we would if we had no money.

Preferring avoiding losses to acquiring gains is why discounts and trial periods work. We buy a product with a discount in fear of loosing the opportunity to buy the product at an as low price again. Furthermore, we are more likely to engage in free trial periods than paying up front, as we tell ourselves that a free product does not cost us anything.

This phenomenon is referred to as sunk cost dilemma in economics. Sunk costs are costs that have already been incurred and cannot be recovered. For this reason, we shall keep from letting sunk costs influence a decision, as doing so would not be rationally assessing a decision exclusively on its own merits. In a rational world, costs already incurred have nothing to do with money to be spent in the future.

Sunk costs greatly affect our decisions, as we as humans are inherently loss aversive. Being risk and loss aversive is letting sunk costs matter. We do not like â€œwastingâ€ resources.

The Lazy Registration pattern utilizes loss aversion in that it lets the user invest time and effort into a product so that when time has come to quit, the user is aversive towards loosing what has been built. The time and effort spent is sunk cost – but as we feel awkward about letting it go to waste, we register for an account in order to be able to save our work.

The assessed value of registering for an account become larger than the cost of giving away private information and opening yet another account once time and effort has been put into the product, as it is now is valued as a loss and not a gain.

Amos Tversky and Daniel Kahneman first identified Loss aversion in 1979, but more notably described in 1992 when the two researchers outlined that people react differently to negative and positive changes.

More specifically, that losses are twice as powerful compared to their equivalent gains, a foundational concept of prospect theory. Prospect theory describes how individuals choose between options and how they estimate the perceived likelihood of different options.

4 Why do we buy insurance?

12 0
From facebook.com
See all 2 example screenshots