Our motivation increases as we move closer to a goal 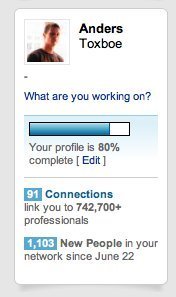 ▲ The iterations versions of LinkedIn included a completion meter and visualized how close the user was to having a "complete" profile.

If your application is geared toward a purpose with an end goal, you can use the fact the our Need for closure drive us toward a well defined end-goal.

Optionally, you can divide a larger task into fewer sub-tasks and use the completion of each sub-task to give the user a break and/or communicate what is next.

Set and communicate expectations and progress.

A 10-space coffee card pre-stamped twice will be completed faster than an 8 with no pre-stamps. Providing artificial progress towards a goal will help to ensure users are more likely to complete a task or purchase.

Beware of the post-reward reset effect

Our motivation has a tendency to drop immediately after after a goal has been reached – even when there is a second reward in the horizon. Consider how you can counterbalance this phenomenon.

…And reward users for completion of each

Far-away rewards are much less motivating than near term ones. If you are offering rewards for specific user actions, you will most likely want to reward sooner than later. By increasing the velocity of rewards, you may find that the total reward sum needed will be lower.

Furthermore, the illusion of progress toward a goal induces task and purchase acceleration.

Behaviorist Clark Hull first proposed the goal gradient hypothesis in 1932 – that our tendency to approach a goal increases with proximity to the goal. Its effect has important theoretical and practical implications for behavior in reward programs. Although the hypothesis has been extensively studied on animals, its implications for human behavior and decision making are understudied.

4 Goal-graident effect at Laws of UX

9 Even The Illusion Of Progress Is Motivating by Susan Weinschenk