Use rewards to encourage continuation or introduction of wanted behavior 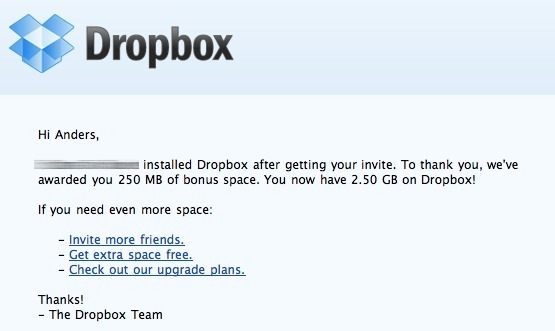 ▲ When you invite friends to join dropbox.com and those friends end up creating an account, you are rewarded with extra space in your dropbox folder. The reward of prolonged play provide a great incentive to refer friends to use the dropbox.com service.

Rewards is a mechanism for telling users that they have done well – that their actions have been judged favorably.

Fixed rewards are given out at a set time, amount, and type and are opposed to variable rewards, which feel more like random rewards.

In web applications fixed rewards are the most commonly used type of reward as they provide clear goals for users to strive for. At Hacker News, features such as voting on comments, or changing template colors are unlocked as you collect Karma points for your activities. At Stackoverflow.com, you receive a badge as you engage more and more in the community. Both provide clear set goals that users can strive for in order to climb up the ladder of status in the community.

The right reward at the right time and amount

Everyone likes to be told they are doing a good job, but it is essential for rewards to work that they are given out at the right time, in the right amount, and that it is the right rewards that is being given. Ask these questions for each opportune moment to determine what is right1:

There is only one way to find out the right balance of time, amount, and kind of reward: through trial and error. Balancing rewards is often a question of “good enough”1.

There are several types of rewards that games and web applications can give. These are the most common1.

Use rewards to encourage continuation or introduction of wanted behavior in your users.

In behaviorism, the rate or probability of a behavior (“response”) is tried increased through stimulus (e.g. candy). The quality, or response strength, is assessed by measuring frequency, duration, latency, and accuracy2.

Positive and negative rewards (and punishments)

There are two ways to strengthen behavior through rewards: bring pleasure or excuse from pain – positive or negative rewards (also called reinforcements). Opposite of rewards are punishments, which does not necessarily remove what was first rewarded behavior3.

3 Psychology is fun at gamasutra.com

What we call rewards in this article is also called reinforcement. The opposite of a reinforcement is punishment.

1 0
From dropbox.com
2 0
From app.getsidekick.com
0 0
From vimeo.com
3 0
From ivillage.com
See all 5 example screenshots