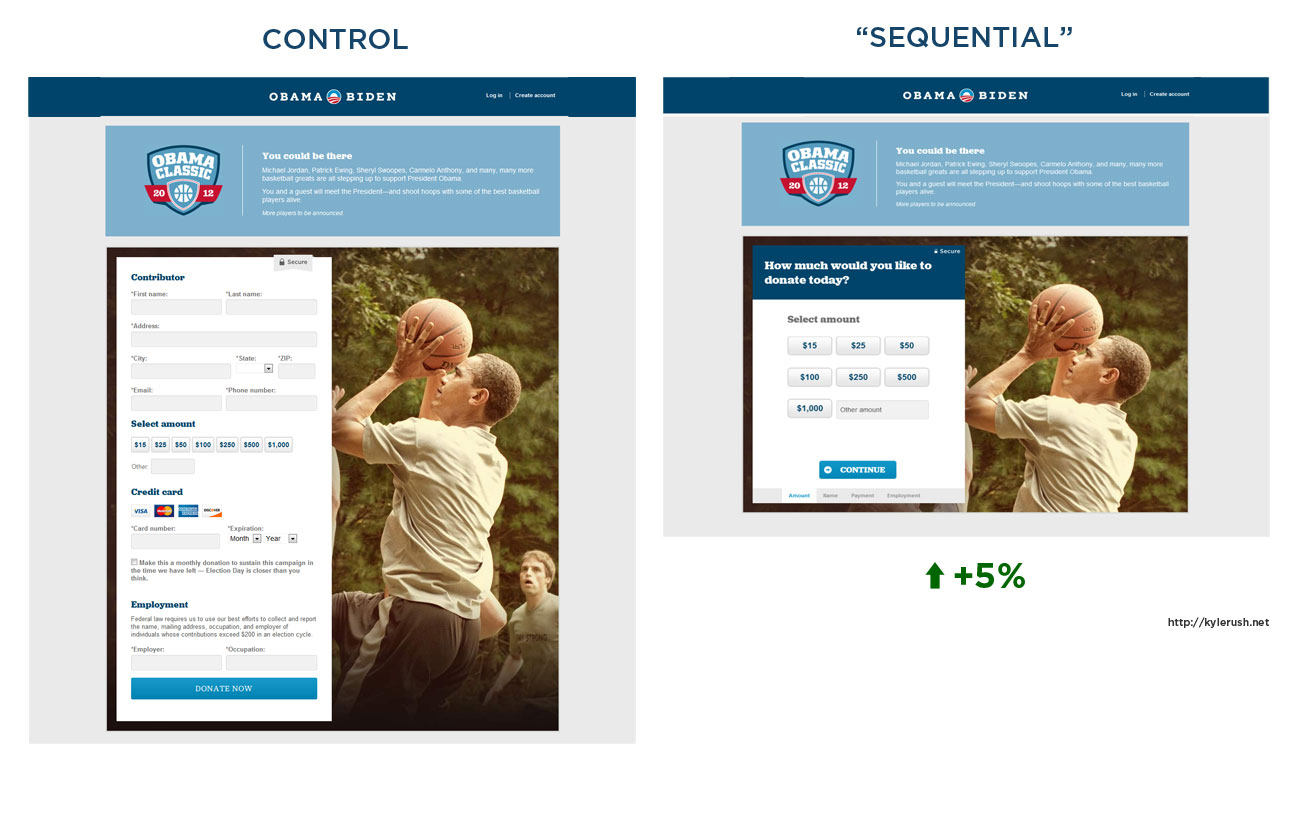 ▲ By breaking the donation process up into sequential steps, the campaign increased donation conversions by 5%, collecting millions of incremental dollars. People like to see themselves as consistent and rational – getting started with the donation amount committed them to finishing what they had started.

Find ways to make people state their agreement to a decision in order to pave way for similar and larger commitments in the same category, later.

Ask for small commitments or easy agreements to pave the way for bigger commitments later. To get to a more substantial agreement, make it easier for your users to buy in early and small; it will be easier for them to buy in later and larger.

Simple ways of using the Commitment and Consistency principle in web design includes:

Make the commitment positive and personalized. Sart your sentence with “Yes!” and personalize the headline – for example “Yes – I am ready to improve my website’s conversion rate!”

Getting commitments to work

People like to be consistent with the things they have previously said or done. People generally want to be seen, as honoring their commitments consistently; as somebody who can be counted on, instead of somebody who flip flops, and is without self-control.

For commitments to be powerful, they need to be public, be actively followed up by an action, and voluntary. Every time we make a public commitment, we slowly change our attitudes toward that commitment. If we say, we use a product, but have actually only used it a couple of times, we have a tendency to change our behavior toward starting to use the product more, in order to act consistently with our public commitment. That in turn can lead to even more use of the product, which then might invoke another commitment. So it turns out to be this self-fulfilling cycle of larger and larger commitments.

The key is to make people state their position, declare their intentions, or show a small gesture of support. Generally, people will act in a manner consistent with these small requests,
even if later asked to make a much larger, but consistent, commitment.

Getting just a small commitment from your potential customers, like getting them to sign up for your newsletter or liking your page on Facebook, will make them more likely to purchase from you, in the future.

We will go a long way to avoid a strong dissonance, between our words and our actions. If we say we will do a thing, we feel we must, even if following through on our words, is actually irrational.

1 11% conversion rate increase with a “Commitment Checkbox” at ConversionVodoo

2 Optimization at the Obama campaign: a/b testing by Kyle Rush

3 The Principle of Commitment and Behavioral Consistency
by Therese Fessenden