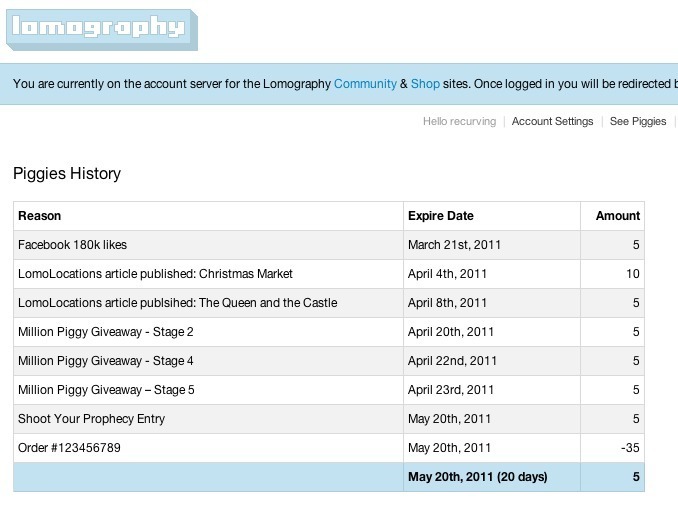 ▲ At the retro camera company, Lomography, you can earn â€œpiggie pointsâ€ for your online activity, which translates to cold cash in the lomography online store. Piggy point rewards are given out both at fixed ratios and at variable intervals.

The activity level of users is a function of how soon they expect a reward to be given. The more certain they are that something good or interesting will happen soon, the more activity they will produce. When users know a reward is a long way off, the motivation is low and so is user activity2. This reward schedule is called a fixed one, as users are rewarded again and again with a fixed ratio or interval. Variable ratios and intervals on the other hand randomize rewards around an average. The latter produce the highest activity in users.

Read on to find out what variable reward ratios are and how they are different to fixed ratios and intervals.

Lomography.com sells retro analogue cameras on their website and in physical stores. To spark the enthusiasm of their lomographic society (fans taking pictures with lomography cameras), Lomography has created an online community for sharing pictures.

Community activity is backed by a “piggie bank” system where users can earn piggie points by having their photos selected as “photo of the day”, by submitting reviews of cameras and accessories, by winning rumbles and competitions, by translating content, and much more. Piggie points, which have an expiration date, can be used in the online shop to by cameras and thus translate into cold cash. The piggie bank system utilizes a mix of fixed and variables ratios and intervals.

At the retro camera company, Lomography, you can earn “piggie points” for your online activity, which translates to cold cash in the lomography online store. Piggy point rewards are given out both at fixed ratios and at variable intervals.

Rewards with a fixed ratio are given out again and again after completing the same action the same amount of times. It could be that you will receive 10 karma points every 5th time you reply to a comment or that you would increase your level every 10th time you uploaded a video.

The problem with fixed ratios is that users distinctly pause completing actions when they receive a reward, as they know receiving a new reward will take a while. This creates an opportune moment for the user to walk away. However, the break in rewards caused by fixed reward ratios might also give the user an opportunity to explore different aspects the system.

Variable ratios are rewarded after a specific number of actions have been carried out, but that number changes every time. A user might know to upload approximately 10 videos to rise in levels, but the precise number is randomly generated every time – everything has a chance of reward. Such variable ratios have proven to stimulate more activity than fixed ratios – even when on average the same amount of rewards are given out.

Variable ratios are free from the pause in activity generated from fixed ratios. It’s important to note that users do not know how many actions are required this time, just the average number from previous experience2.

Instead of providing a reward after a certain number of actions has been completed, interval schedules provide rewards after a certain amount of time has passed. Users being rewarded in fixed intervals will pause activity once an award has been given and wander around for a while. They will return frequently to check if their reward has been “refilled” or has reappeared. Gradually, checks will become more frequent as the proper time nears.

Vimeo.com utilizes fixed reward intervals for its regular users, who are allowed to upload only 500 mb of video every week. After the fixed interval of one week, the user’s upload quota is refilled. As users reach their upload quota on vimeo.com, their activity will pause until its refilled next week. Vimeo hopes users will use the pause to consider buying a pro account with no upload quota.

Variable and fixed ratios and intervals can successfully be combined. Say that you need to upload 20 videos to become an elite member, where after you will have the chance of picking up a free pro-membership appearing at variable intervals.

Extinction is what happens when you stop providing a reward and will feel as a punishment that cause anger and frustration in the user. Behavior learned on the variable schedules are much harder to extinguish, as users will never know if what they are experiencing is just an unusually long run of misses and that next reward will justify their patience.

The principle of avoidance uses the negative reward of decay, pain, or other forms of punishment to keep users active. An example could be to force users to revisit your site and log in once a week to avoid their “elite” status to be taken away.

In behavioral psychology rewards (or positive reinforcement on people) is one way reinforcing a behavior by providing a desirable stimulus. The western school of behavioral psychology and reinforcements was grounded by the 1938 seminal work on reinforcements by B.F. Skinner. The school has been critiqued for focusing too narrowly on extrinsic motivation (external benefits) and not embrace intrinsic motivation (incentive from the pleasure of the activity itself).

3 Psychology is fun at Gamasutra.com

5 Only a game by Chris Bateman

6 Skinner, B. F. (1938). The Behavior of Organisms: An Experimental Analysis, New York: Appleton-Century-Crofts

0 0
From airtable.com
See all 2 example screenshots