We place greater value on objects we own over objects we do not, especially if sentimental value has been placed in them 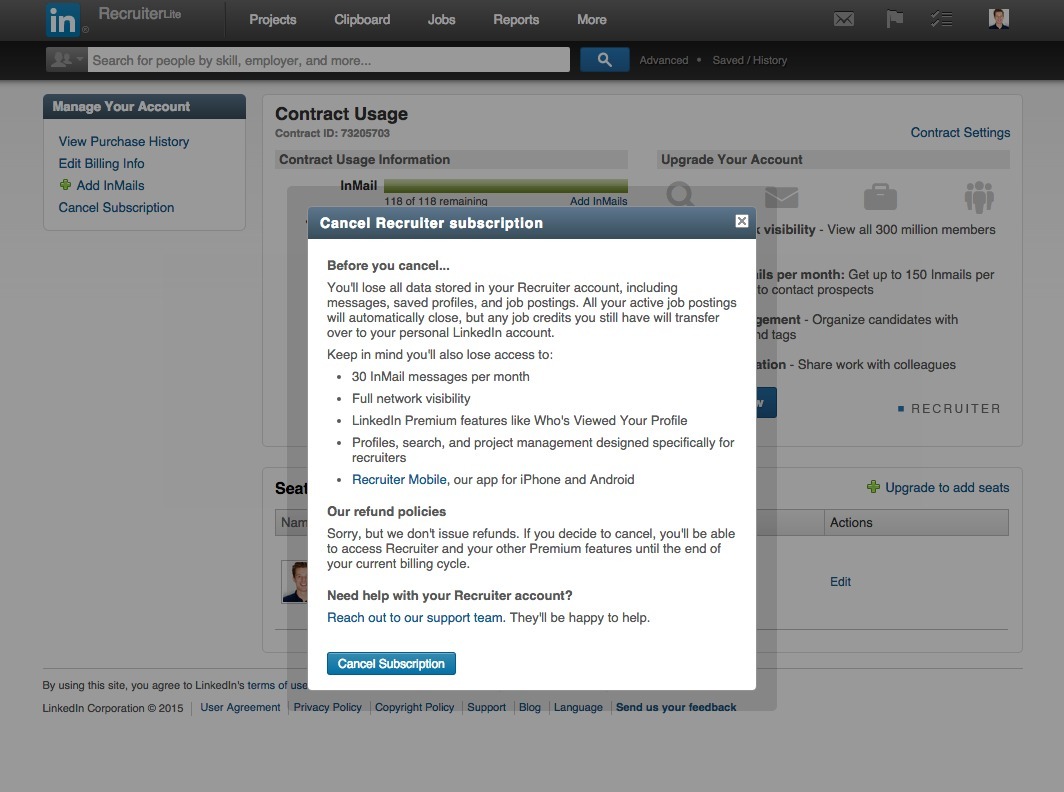 ▲ When you cancel your recruiter subscription at LinkedIn, you're reminded of everything you will lose. LinkedIn pokes to your sense of Endowment and uses Loss Aversion to make the loss of giving up your account seem greater than what you will save.

The endowment effect can be described as the divergence between willingness to buy and willingness to sell. We place higher value on objects we own over objects we do not, especially if sentimental value has been placed in them. Ownership creates satisfaction.

When we get something, we adjust to our level of ownership, which then becomes the baseline by which we judge future gains and losses. Possession feels like ownership: consider giving away free trials or make users invest time in your service.

In a university study, students were parted into two equally sized groups. One group was given mugs ("seller") and the other ("chooser") nothing. When asked, the sellers in average wanted $7.00 for the mug, whereas the choosers were only willing to pay $3.50. The mug was evaluated as a gain by the choosers and as a loss by the sellers.

As users sign up, start build their account, and making it theirs, the endowment effect comes into play. Amazon does it well by letting its users make wish lists, make gift organizers, rate and recommend products, make lists, award users with â€œ#1 reviewerâ€ badges, and more. As users interact with Amazon and gain ownership over the Amazon website, the endowment effect makes them place higher value on conducting transactions on amazon.com vs barnesandnoble.com.

Another successful website to use the endowment effect to retain users is the online radio station: last.fm. When users listen to music at last.fm, they can choose to “love” what they hear and thereby indicate to last.fm that they are interested in hearing something similar again. Last.fm remembers what music you love and constructs a metric of your music taste that it uses to deliver music that caters to your preference. The website has managed to let the user take ownership in the site with the music profile build up with consistent use. The has resulted in many preferring to listen to music over the Internet via last.fm than over their iPod or through the CD collection.